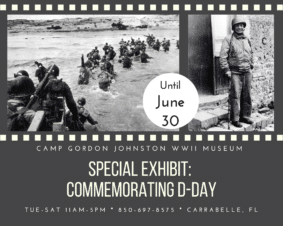 The Camp Gordon Johnston Museum at Carrabelle Beach invites you to learn more about D-Day during a special exhibit on display through June 30th. Camp Gordon Johnston trained Infantry Divisions and the men who trained here were put to the test on the heavily fortified beaches of Normandy, France on D-Day, June 6th, 1944 in the largest seaborne invasion in history. Learn more about the battle and Brigadier General Theodore Roosevelt Jr,. the highest-ranking officer to step on the beach on D-Day. The museum is open every Tuesday through Saturday from 11 am to 5 pm. There is no charge for admission but donations are gladly accepted.